COVID-19 Lung Damage – Can Inhaled FGF-1 be a Viable Treatment?

It is estimated that approximately 30% of individuals who become infected with the coronavirus and have symptoms will sustain long-term lung damage. As is now being seen in survivors of the COVID-19 pandemic in China, people who recover can still be left with substantially weakened lung capacity. Physicians are now following the first wave of patients who were discharged from hospitals and significant numbers of these individuals still have respiratory issues, especially upon exertion. Estimates are that it will take three months to a year or more for a person’s lung function to return to pre-COVID-19 levels, if they ever do return to those levels.

The cells in the lungs which are attacked by the SARS-CoV-2 virus are the epithelial cells. These cells line the airs sacs in the lung and are directly responsible for the proper exchange of oxygen and carbon dioxide in the healthy lung. When epithelial cells become damaged either by the virus directly, or through a hyper-response by the body’s immune system, pneumonia and respiratory distress result. If the epithelial cells cannot be regenerated, long-term lung damage and breathing difficulties persist.

Members of the fibroblast growth factor family, including FGF-1, FGF-2 and FGF-10, are all potent stimulators of lung epithelial cell proliferation and have shown success in reversing lung damage in animal models of viral pneumonia. Dr. David Ornitz, a professor at Washington University School of Medicine and a noted expert in FGF signaling has showed that FGF-2 is required for lung epithelial cell recovery from injury and states “…FGF-2 administration or augmentation may have therapeutic benefit for lung injury”. 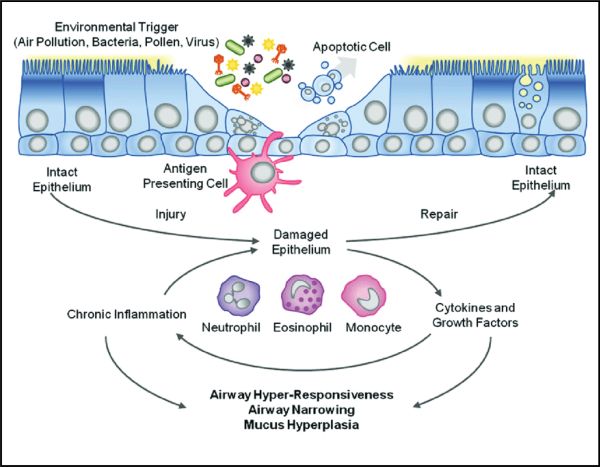 Respiratory viral infections are linked to chronic lung diseases, as has been long appreciated following annual influenza epidemics. There is little doubt the same will also hold true with COVID-19 survivors. Early publications indicate that over 80% of patients that had to be hospitalized for COVID-19 had visible lung damage on their CT scan taken at the time of their discharge. After a serious case of COVID-19, it is estimated a patient’s lungs will take 3-12 months to recover to their pre-COVID-19 levels, depending on how much scarring of lung tissue has occurred.

How do viruses such as SARS-CoV-2 and influenza cause this damage to lung tissue? Looking at how the viral infection progresses at a cellular level gives insight into the process and also points to therapeutic options that may be tried to heal the lung post-infection. 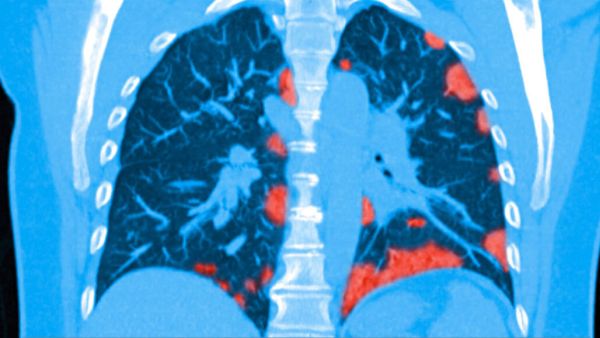 Figure 2. Colorized scan of a patient with COVID-19

Figure 3. CT scan of the lungs of a woman through her COVID-19 infection and recovery

SARS-CoV-2 and the influenza virus cause an infection in the respiratory tract, including the nose, throat and lungs. The virus is inhaled or transmitted to the mucous membranes of the mouth, nose or eyes. It then travels down the respiratory tract and binds to epithelial cells lining the lung airways via specific molecules on the cell surface (cell surface receptors). Once inside the cells, the virus hijacks the protein manufacturing machinery of the cell to generate its own viral proteins and create more viral particles. Once mature viral particles are produced, they are released from the cell and can then go on to invade adjacent cells.

While this process causes some lung injury, most of the symptoms of the flu are actually caused by the immune response to the virus. The initial immune response involves white blood cells that are part of the body's immune system, and include macrophages and neutrophils. These cells express receptors that are able to sense the presence of the virus. They then sound the alarm by producing small hormonelike molecules called cytokines and chemokines. These molecules alert the body that an infection has been established.

Cytokines orchestrate other components of the immune system to appropriately fight the invading virus, while chemokines direct these components to the location of infection. One of the types of cells called into action are “killer” T-lymphocytes, a type of white blood cell that fights infection. When T-cells specifically recognize influenza virus proteins, they then begin to proliferate in the lymph nodes around the lungs and throat. This causes swelling and pain in these lymph nodes.

After a few days, these T-cells move to the lungs and begin to kill the virus-infected cells. This process creates a great deal of lung damage (similar to bronchitis) which can worsen existing lung disease and make breathing difficult. In addition, the buildup of mucous in the lungs, as a result of this immune response to infection, induces coughing as a reflex to try to clear the airways.

Killer T-cell function can decline with increasing age or during the use of immunosuppressive drugs, and under these conditions, viral clearance is delayed. This results in a prolonged infection and greater lung damage. This can also set the stage for complications, including secondary bacterial pneumonia, which in itself can be deadly.

Figure 2 shows a colorized CT scan of the lungs of a patient infected with COVID-19. The light red areas indicate regions where lung damage and scarring has occurred.

An estimated 30% of individuals who become infected with the coronavirus and have symptoms will sustain long-term lung damage. Hospitalization increases that number to an estimated 80% of patients with lung damage. This damage and resulting respiratory distress can take 3-12 months to heal, and as has been seen with influenza epidemics, in many cases lung capacity will never return to pre-infection levels. Patients with severe COVID-19 infections are often unable to breath on their own and may require ventilator support to help circulate oxygen in the body. It is known that this intubation process and forcing oxygen into the distressed lung can cause even further damage to lung tissues.

Dr. Panagis Galiatsatos, an expert on lung disease at Johns Hopkins Medical Center and who sees patients with COVID-19 states, “Once the pandemic is over, there will be a group of patients with new health needs: the survivors. Doctors, respiratory therapists and other health care providers will need to help these patients recover their lung function as much as possible.”

Whether it occurs at home or at the hospital, people who survive and recover from COVID-19 may have lasting pulmonary scarring. As shown in Figure 3, lung damage can be seen in this patient even after she has become virus-free. Lung damage and scarring can be seen in the lower left area of the left lung. At day 11 the woman was virus free and was soon discharged from the hospital, but lung damage is still visible at day 15.

Among patients in China who have recovered from COVID-19, comes the first evidence, that some may suffer long-term lung damage from the disease. In 70 patients who survived COVID-19 pneumonia, 66 had some level of lung damage visible in CT scans taken before hospital discharge, researchers report March 19, 2020 in the journal Radiology.

Similar damage has been documented in survivors of SARS and MERS, respiratory diseases caused by coronaviruses similar to the SARS-CoV-2 virus. Long-term studies of SARS patients have shown that roughly a third of people who recovered from severe bouts were left with permanent lung damage. In the case of MERS, one study found about a third of people who recovered from a serious infection still had signs of lung damage seven months later.

But while initial lung images indicate that SARS and MERS typically set into just one lung, COVID-19 appears to be more likely to afflict both lungs immediately. In 75 of the 90 patients reported in the Neurology paper, damage was seen across both lungs. In addition, 42 out of 70 patients displayed the type of lesions around the epithelial cells of lung air sacs that are more likely to develop into scars.

Given how widely the pandemic has spread, chronic lung conditions from COVID-19 could challenge many hundreds of thousands of people in the months and years to come. While an estimated 80 percent of COVID-19 cases are mild, the rest display problems ranging from breathing difficulties to respiratory failure. This would be the candidate patient population on which to test the lung healing effects of inhaled FGF-1.

Fibroblast growth factors (FGFs) are involved in a diverse array of physiological and pathological conditions. Since the initial discovery of FGF-1 and FGF-2 over 40 years ago, the FGF family has grown to consist of 22 related members. FGFs play pivotal roles in the development and maintenance of many tissues and organs derived from all of the three main cell types (germ cells) in the body, including the ectoderm (e.g., brain, skin), mesoderm (e.g., cartilage, bone, muscle, adipose tissue), and endoderm (e.g., lung, gastrointestinal tract, liver, pancreas).

The involvement of specific FGFs in early lung development has been firmly established. At embryonic day 8 in the mouse, FGF-1 and FGF-2 are critically involved in the initial specification of which embryonic cells will ultimately differentiate into lung tissue. These two FGFs, along with FGF-10, are then the prime drivers for the subsequent growth and development of the mature embryonic lung.

Based on the potent activity of FGFs to stimulate the growth of lung epithelial cells, researchers then began to examine the effect of these growth factors in animal models of lung injury. 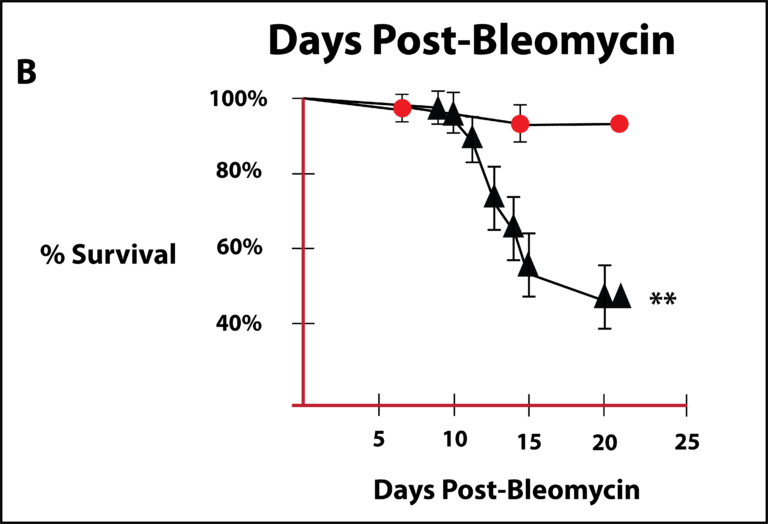 Figure 5. Survival of mice after the lung damaging agent, bleomycin

In a mouse model of lung injury, where mice are infected with high enough titers of the influenza A virus to cause lung damage, recombinant FGF2 protein markedly reduced mortality and the severity of lung injury in the treated animals (Wang et al, 2018). As FGF-1 activates all of the same cell surface receptors on lung epithelial cells as FGF-2, but more potently (Zhang et al, 2006), we would predict a similar, if not superior, efficacy of FGF-1 in this animal model of lung injury.

Ornitz and his colleagues (Guzy et al, 2015) studied the effects of FGF-2 in a mouse model of lung injury where the lungs are damaged by administering the chemotherapeutic agent, bleomycin, which has a known toxic effect on the lungs. They reported that FGF2 is essential for epithelial cell repair and maintaining epithelial cell integrity after bleomycin-induced lung injury in mice. They concluded that that FGF-2 administration may have therapeutic benefit for lung injury. Figure 5 is a survival curve for animals given bleomycin either in the absence (triangles) or presence of FGF-2 (circles) that was reported by Guzy et al. From this graph, a dramatic increase in survival is apparent in the FGF mice. Closed circles are animals with FGF-2 present and the closed triangles represent animals with no FGF-2 present.

Numerous other studies support the activity of FGFs in protecting and stimulating the growth of lung epithelia cells and in lung repair. Given the excellent safety profile that has been established in humans with FGF-1, it is appropriate to move forward on clinical testing of this FGF in COVID-19 survivors with lung damage.

Worldwide, the third leading cause of death is from respiratory disorders and a large majority of the individuals dying from these disorders will have lung damage. The emergence and rapid spread of the SARS-CoV-2 virus has dramatically raised the awareness of respiratory distress and lung damage.

The FGF family of proteins is intimately involved in embryonic lung formation. A number of the FGFs, including FGF-1, are potent stimulators of the proliferation and maturation of lung epithelial cells and have shown excellent efficacy in animal models of lung injury.

Wund will work with its research partner, Zhittya Genesis Medicine, to develop a “proof-of-concept” clinical trial, where FGF-1 will be administered by inhalation to COVID-19 survivors who still display respiratory deficiencies. This new medical indication will proceed with high priority and hopefully similar trials can also be initiated to study lung repair in other respiratory disorders, including influenza, emphysema, severe asthma and COPD, all currently unmet medical needs with very large market potentials.